The Primary Club have, for many years, sponsored the England & Wales Blind Golf (EWBG) annual matchplay tournament, played for the Lew Vizzard Knockout Trophy.  This year’s competition was held at the Gaudet Luce Golf Club, Droitwich, who have been great supporters of EWBG for nearly 20 years.

The event started with the Sunday night draw ahead of Monday’s first and second rounds, in which the competitors had to contend with difficult wet conditions. Tuesday morning was the quarter final and the Stableford Plate for those knocked out on Monday, followed by the semi final for which the weather was even worse than Monday with rain and howling wind.

For the final on Wednesday however the weather broke and Steve Beevers, guided by Ian Tyrer, took on Jason Heathfield, guided by Magda Buckley in blue skies and sunshine. It was a very tense final with both players playing well and finished on the 17th with Steve winning 2 up and 1 to play. 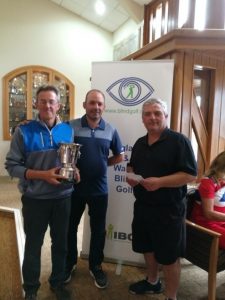