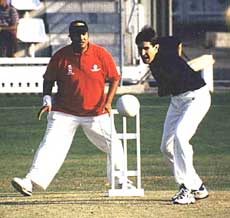 The Primary Club is one of those slightly odd, very English, institutions that happened almost by accident. The Club was started at Beckenham Cricket Club, Kent, in 1955 by Ralph Lilly, Keith Patterson, Norman Patterson and Mike Sheeres, four slightly inebriated young bachelors, depressed by their own performance with the bat. They vowed to support F R Brown’s Fund for Blind Cricketers. Membership was initially limited to those out first ball in matches for or against Beckenham and in nine years, the Club raised £45.

As it became increasingly apparent that there could be a real role for The Primary Club, what began almost as a joke became a serious, if idiosyncratic, charity which grew rapidly. In 1973 the BBC’s Test Match Special team, in particular the late Brian Johnston, started to talk about the Club on the radio and members were recruited from cricket-playing countries all over the world.

There are now about 9,800 members who have donated £3 million to the Club. In 2014, The Primary Club made grants in excess of £160,000 to clubs and schools for the blind throughout the United Kingdom.

Originally all Club donations went to Dorton House School, run by the Royal London Society for the Blind. In recent years the Club has given considerable support to British Blind Sport and has also provided funds for sporting and recreational facilities to over 50 schools and clubs for the visually impaired all over the UK.

In 1997 Derek Underwood MBE, one of England’s finest cricketers, who began his cricket career in Beckenham, became Patron of the Club.

Click here for a pdf of the earliest Club document, circa 1955.