In 2016 The Primary Club made grants totalling over £170,000. Most of the money comes from members’ donations.

To apply for a grant from The Primary Club, please write to the Hon Sec whose details are available on the About Us page. We have produced a guidance note to assist grant applicants; to download it, please click here.

In 2017, The Primary Club launched an award to support volunteers, teachers or other organisations in providing blind and visually impaired children in mainstream education with opportunities to participate in sport and recreational activities.  Details of the award, criteria and terms are available here.  Applications should be submitted using this form by 31 January 2018 to education@primaryclub.org. 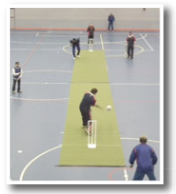 Visually Impaired Cricket
The Royal National College for the Blind (RNC) in Hereford was delighted to receive £6,300 from The Primary Club in 2013 to fund goalball and cricket activities. Money for cricket activities in 2013 was spent on new kit and accommodation while attending competitions in Kent, Swindon and Dorset. It has also been used for 2014 activities which include trophies, registration fees, home and away catering, sight classification and umpires.

“In 2010 we received a donation from you to buy smaller tandems for our cycling endeavours,” says David Shaftoe, Open Country Project Officer. “With the expanded range of tandems, we are now able to contemplate feats that would previously have been quite beyond us. In 2010 for example, we were very proud to complete the Way of the Roses, the 170 mile cross-country route from Bridlington to Morecambe” 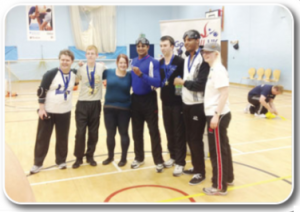 Several years of funding from The Primary Club has helped The Cambridge Dons goalball club flourish – it was founded in 2012 and has grown to 17 members, four of which are fully sighted. The club has three elite level players (two of which are part of the GB squads and one who has taken part in tournaments for GB), about five intermediate players and six novice players – other members are amazingly helpful and much appreciated volunteers who are training to be officials.
The two GB players are Sarah Leiter and Warren Wilson. Sarah has played in a tournament with GB and Warren is currently a squad member with aspirations to break into the team. Neither had played goalball before they joined the team. 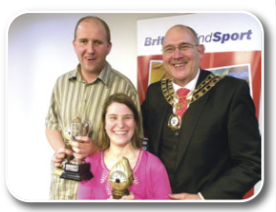 Swindon hosted the Championship Finals of the British Blind Sport Tenpin Pairs this year. Each team played 11 games and competition was keen with squads from Sheffield, Basingstoke, Birmingham, Gloucester,Taunton and Fylde; Portsmouth and Swindon itself.
The Mayor of Swindon and his lady supported the event and joined the evening dinner to help present the trophies, together with John Spalton and David Bentley from the Primary Club. Mark Gould, Chairman of BBS Tenpin thanked the guests and acknowledged that without the support of The Primary Club the event would struggle to take place. On behalf of the Primary Club John Spalton and David Bentley commented on how much they had enjoyed the competition, and complimented the competitors on both their skill and spirit of the game. 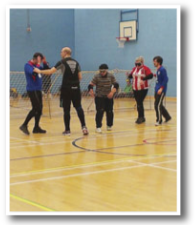 Goalballers elsewhere also benefited from Club members’ generous donations. Pictured are goalballers from the Sheffield Royal Society for the Blind – two are training with the GB squad and they also have champions at archery, reports Peter Stancill, Community Advice Officer. 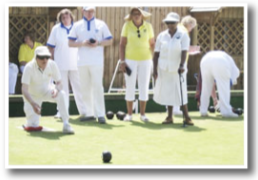 “Clevedon Visually Handicapped Bowls Club has been in existence for well over 20 years,” said trustee Allan Pine. “During the summer season members meet every Tuesday evening for friendly “roll-ups”. Over recent years they have hosted tournaments and games involving visually impaired bowlers from clubs in the region, including Bridgwater, Bath, Gloucester, Cheltenham and Weston-Super-Mare. In July last year the club broke new ground by entertaining its first ever touring side. The visitors from Hillingdon and District VHBC provided us with stiff opposition and, although we were ably supported by guest players from neighbouring clubs, Hillingdon ran out worthy winners. It was a memorable day enjoyed by all involved.  “Our club members would like to express their gratitude and appreciation for the support received from The Primary Club.”

Donations from members of The Primary Club have funded these projects for blind and partially sighted sports men, women and children throughout the UK.