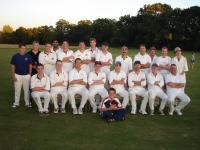 The Primary Club Casuals were formed in 2004 to raise awareness of The Primary Club amongst its original roots, when a couple of young Primary Club volunteers took it upon themselves to arrange a team to play Newport Inn CC in Hampshire. That first team set the template for the Casuals’ future, being a hotch-potch mix of 17-40 somethings of limited cricketing ability but unlimited enthusiasm!

Since then, the Casuals have become an established side, playing several fixtures a season around London and the South-East. Matches range from a simple turn-up-and-play affair to well-attended family days out with teas for sale, a raffle and barbecue, all to raise funds for The Primary Club; however it is raising awareness and signing up Primary Club members – as well as fun – that are the main priorities.

If your club would be interested in playing the Casuals in the future, or if you would like to play for the Casuals, please contact fixtures@primaryclub.org